The White Swan, Stoke Golding is now also open on a Tuesday and Wednesday. Cask ale night is on Wednesday and is £2.90/pint.

The Queens Head, Upper Bond Street has a new licencee called Sam who used to work at the Dog & Hedgehog in Daddlington. It is intended that the Queen's Head will be accepting card payments in the near future.

The Dog & Gun, Earl Shilton has new tenants and on Wednesdays beer is £2.50 a pint. 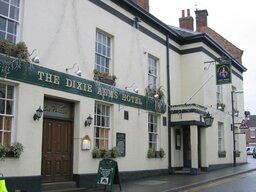 The Dixie Arms, Market Bosworth featured in an episode of Channel 4's "Four in a bed". A show that features four B&B owners who stay at each other’s premises through the week, with the best host chosen by the contestants after all stays have been completed. Licencee Alex McDonald wowed the other competitors with her passion for her pub, where she has worked for more than 15 years, becoming the manager and eventually buying the venture from the previous owners in 2012. The Dixie Arms went on to win the competition. The episode can be watched by clicking the link below:
https://www.channel4.com/programmes/four-in-a-bed/on-demand/69775-072

The Shilton Vaults held an inaugural charity pub quiz, supported by CAMRA members. The event was a success, with plenty of banter between the teams whilst raising over £100 in the process, which is to be donated in support of the victims of the war in Ukraine. It is hoped that Sue will be able to host a similar event in future!

The Red Lion, Barwell had a new temporary landlord at the beginning of March.

The Red Lion, Barlestone is still closed. The car park is now coned off and it has a "To Let" sign outside.

The Bulls Head, Nailstone has been closed since lockdown in March 2020, however fresh plans have been submitted to renovate it by replacing the front entrance, front windows and roof rafters, and to create a two-storey extension to the rear with a new private entrance and stairwell for the upstairs accommodation.