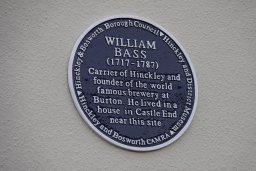 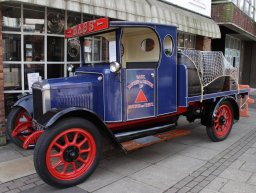 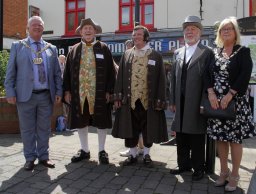 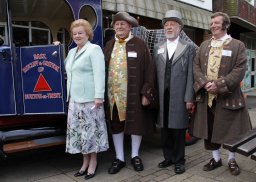 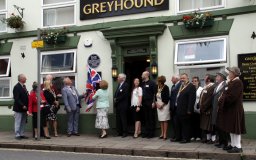 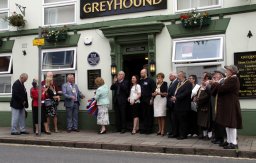 Blue plaques were unveiled in Hinckley on Saturday 3rd June, in honour of two brewing greats connected to the town.

The first unveiling was at the top of Castle Street at 11.30am then moving to The Greyhound pub on New Buildings. The blue plaques commemorate the history and 300th birthday of William Bass, who grew up the town, and William Butler, who was born in Hinckley.

Guests of honour included Jennifer, Lady Gretton, the Lord Lieutenant of Leicestershire, who led the unveiling, along with the mayors of Hinckley and Bosworth and Burton upon Trent, Cllrs Ozzy O’Shea and Simon Gaskin, the chairman of Leicestershire County Council, Janice Richards, and heritage brewer Steve Wellington.

Lady Gretton’s is a direct descendant through her late husband’s family which was in business with Bass, under the partnership known as Bass, Ratcliff and Gretton.

A 90 year old Bass delivery lorry, provided by the Bass Museum was also on display in Castle Street whilst Hinckley and Bosworth CAMRA members, Chris, Robin and Colin were dressed in period costume to add to the history of the occasion.

It is not known exactly where Bass lived in Hinckley, but there is evidence that the family home was in Castle End, now Castle Street. The plaque has been mounted on a building of appropriate age, by permission of its owners Martina and Timothy Payne.

The plaque to William Butler of Mitchell’s and Butler brewery, was unveiled at The Greyhound pub in New Buildings, opposite where he was born in a cottage (which no longer exists) in 1843.

Later in the year there will be a similar Blue plaque unveiling at Orton on the Hill to celebrate the life of a third local brewer, William Worthington.

An exhibition, All Hail the Ale, celebrating the lives of the three great brewers is on display at Hinckley and District Museum in collaboration with the National Brewery Centre in Burton.

It includes Bass family material not seen in Hinckley for more than 250 years.